All regions and all provinces of Azerbaijan are beautiful with their beauty and charm. Fuzuli, which is a part of Karabakh, has mysterious beauty and magnificent places. Before the occupation of the region, being here you will be astonished by the beauty of Fuzuli. 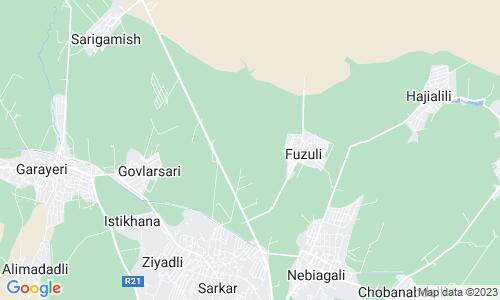 Especially in spring, when flowers bloomed, grasses rose from the meadows, carpets were woven from tulips on the slopes of the mountains between the city of Fuzuli and the village of Horadiz.

Fuzuli covers the sloping plains and lowlands from the south-eastern foothills of the Karabakh mountain range to the Araz River. It borders Iran along the Araz River and Jabrayil, Khojavend, Agjabadi, Beylagan regions. Fuzuli region is also known for its millennia-old Azykh Cave, Guruchay culture, historical and architectural monuments. At different times in the territory of the Fuzuli region, researches were carried out in Garakopektepe, Garabulag mounds, Gunashtapa, Guruchay shores, and other places, thus proving that Azerbaijan has ancient roots.

The bones of the lower jaw of a pre-Neanderthal-Azykhantrop man were discovered by the archaeologist-scientist Mammadali Huseynov in the summer of 1968 in the Azykh cave, 15 km from the district center. This monument, which is a great achievement of Azerbaijani archeological science, revealed the existence of the ancient Paleolithic period in the Fuzuli region of Karabakh.

In addition to the environmental terror to our lands, Armenians by occupying Fuzuli destroyed the region's 12th-century cemetery, Mirali mausoleum of 17th-century, Jalil tomb, 19th-century mosque, Imamzadeh mausoleum, and ancient bridges. There were a number of architectural monuments built under the influence of the Ajami school of architecture in the Fuzuli region. Unfortunately, Our monuments of such historical significance as Ahmadalilar or Argali tomb (end of XIII century), Babi tomb (1273), a  tower-shaped Mirali mausoleum built of smooth stone in Ashagi Veysalli village (XV century), Hajigiyasaddin mosque in Gargabazar village (1682), Caravanserai (1684), a mosque in Gochahmedli village (XVIII century), Haji Alakbar mosque in Fuzuli city (XIX century), “Mashadi Habib” bath (XIX century), ancient monuments of horse and ram figures carved from a stone near Merdinli village (XVIII-XIX centuries) and so on. have been savagely vandalized by Armenians by 2020, who destroyed, burned or attempted to falsify the history of the monuments.

Fuzuli region was occupied by the Armenian armed forces on August 23, 1993. The region was liberated from the enemy occupation on October 17. All the buildings, infrastructure, and housing facilities of Fuzuli's occupied part have been completely destroyed and turned into a plain for years by 2020.