Khinalug village with unique features is located in the mountains at an altitude of 2200 meters above sea level in the region. 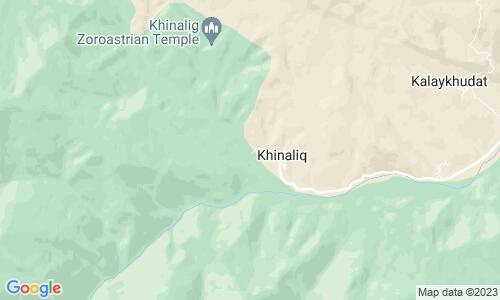 Khinalug is more than 5,000 years old. For centuries, this village has been separated from civilization by dangerous rocks and inaccessible mountains. Thanks to such isolation, the inhabitants have been able to preserve a unique language, customs, and traditions that do not belong to any other language group. The population of the village forms a separate ethnographic group and speaks their own language.

This village is located 65 km from the district center and consists of 380 houses, all of which are ancient. The houses here give the impression of being built on top of each other.

The floors and walls of the houses are covered with colorful and warm carpets and blankets, pillows, mattresses, mutyakka woven by the hostesses. This is not only the decoration of the house but also protection from the winter frosts. Winter is early and very severe, the temperature can reach -30⁰ C.

There are many sacred places in the village and not far from it - feasts with the graves of saints, caves, and unexplored archeological sites. Some of them were built in the Middle Ages: the tomb of Hidir Nabi, Sheikh Shalbuz Mosque, Abu Muslim Mosque (XII century), Pirjomyard Mosque (XII).

Although Khinalig was still a unique place, it ceased to be isolated from the rest of the world. In 2007, Khinalig village was declared a State Historical, Architectural, and Ethnographic Reserve.

Khinalug is an excellent choice for ecotourism lovers.