It’s no coincidence that Sheki, located on the forested slopes of the Greater Caucasus, is added to UNESCO's World Heritage List: Firstly, Sheki has marvelous Muslim architecture that will not leave you indifferent. 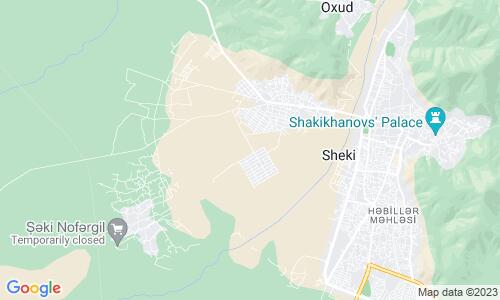 Secondly, the city is like a paradise on earth with its picturesque nature and crystal-clear mountain air, as it is surrounded by the Caucasus Mountains. The area around the city offers a view of natural wonders.

Being one of the old settlements in Azerbaijan Sheki is located in the northwest part of Azerbaijan. The attractive side about Sheki isn’t only in its nature or ancient buildings, but also in its local people. Sheki people are known for their sense of humor and hospitality. The city creates a good atmosphere for travelers and visitors.

This city with an ancient history has interesting places to visit and narrow streets to stroll, where tourists can take a lot of photos. Make sure that your camera is ready to capture the moment of historical attractions while strolling through the narrow streets of the city.

Sheki a loveable place for those, who have a sweet tooth, because it holds confectionary festivals.

Yukharibash State Historical-Architectural Reserve is located in the center of Sheki. There are 25 state-registered historical monuments in the reserve. In this area, natural beauties and ancient monuments created by people are united and complement each other. The "Crowned Water", made of pottery pipes during the khanate period, is still used today. The names of ancient neighborhoods in this area are still preserved.

Sheki Khan's Palace has been added to UNESCO's World Heritage List. Outside the palace, you can buy souvenirs and wear national costumes.

Another place to see in Sheki is the local Old Fortress. There are 11 historical baths here and one of them was built and put into operation in the XIX century. You can find in Sheki historical monuments of different periods. The 5th-century Albanian temple is located in this part of the city. Tourists tend to visit the Yukhari and Ashagi Caravanserais of Sheki, which date back to the XVIII century. You can taste "Sheki halva" and drink tea in the teahouse of the Yukhari Caravanserai.

Piti is famous food in Sheki. It’s cooked and served in clay pots. Your trip to Sheki will become unforgettable with the taste of Piti.

Gilahli Mosque or Gileyli Mosque is a historical mosque built in the 18th century in Sheki. The Albanian church in the village of Kish is a preserved monument and should be added to the list of must-see places.

Gelersen-Gorersen fortress, which is located near the Kish village, was built in the 15th century. Gelersen-Goreresen fortress is the symbol of not giving up, which is translated as “You will come and see”. According to historical facts, the fortress couldn’t be captured by enemies.

The modern city of Sheki was rebuilt in 1772 after being destroyed by mudslides of the Kish River.

Come to Sheki and enjoy every moment of your trip!